The Chinese Shrine at the Salem Pioneer Cemetery is an example of how cemeteries can use history found right within their bounds to tell the story of a diverse and developing place.

In the 1850s, the Independent Order of the Odd Fellows (I.O.O.F.) purchased the first five acres of what is now the Salem Pioneer Cemetery. The first Chinese burial there was probably sometime between 1864 and 1870, according to early I.O.O.F. record books. There was a section of the cemetery, near the northeastern edge, reserved for the burial of Chinese Salemites, but those exact boundaries are lost today. Burials continued in the Chinese section of the cemetery through the 1930s, in line with newspaper accounts of Chinese residents in Salem. Chinatown was located generally on Liberty Street between Court and High.

Though only told from one perspective, newspaper accounts provide some account of Chinese residents in the town. The reporters at the Daily Capital Journal and the Oregon Statesman paid much attention to Chinese funerals and other cultural events in Chinatown. Non-Chinese residents would often line up to watch the processions and the sexton had to shoo away people who wanted to take offerings left on the graves.

In 1903, Salem City Council approved an ordinance to burn the main part of Salem’s Chinatown because it was a “public menace to health and morals.” However, it appears

that the city never went through on their promise to burn the block – though Chinatown did move one block south. Twenty years would mark a change in attitude when Hop Lee, a Chinese laundry-owner, died of a stroke and “would be missed by hundreds of Salem and Willamette valley residents who have had personal knowledge of [his] reliability and integrity at various times during his two-score years of residence here.” The same obituary for Hop Lee mentioned that at the height of Chinatown, there were over 200 Chinese residents. At the time of Lee’s death in 1923, there were only thirty people left there.

In 1901, there were around a dozen Chinese buried in Chinese section of the cemetery. In accord with custom, most Chinese burials were disinterred after a period of seven to ten years and the remains were shipped back to China so they could be cared for by family. There were disinterments of Chinese remains at the Salem Pioneer Cemetery recorded in 1892 and 1902 newspaper articles. The Chinese Consolidated Benevolent Association cited a disinterment in 1948. By the 1970s, almost all Chinese remains had been disinterred, but due to imprecise record keeping, there are likely some Chinese residents still buried there. The shrine fell out of use far before the last disinterments, likely 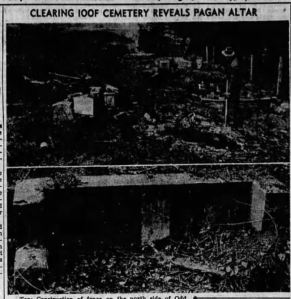 around the 1930s, with the dispersal of Salem’s Chinatown.

By the end of WWII, the shrine and the Chinese section of the cemetery had been covered in brambles. In 1953, an article in the Daily Capital Journal described the re-discovery of the shrine when the parks department cleared some of the brambles from around the shrine. The shrine was again forgotten and in 1963, another article appeared with a photo of the recleaned shrine with the Parks Department director kneeling nearby.

In the summer of 2017, City of Salem Historic Preservation Officer Kimberli Fitzgerald was looking for an archaeology project to complete her thesis requirement for her master’s degree. The 1963 newspaper article, with the shrine obviously still intact, but with no one currently knowing anything about it, seemed like a promising topic. We

went to the cemetery and, with the help of Rick Hilts, owner of and whose father also owned the adjoining City View Cemetery, were able to locate what we thought might be the shrine.

Somewhat shockingly, the shrine was almost completely destroyed. What happened to it between the 1963 and 2017 is still largely a mystery. It’s possible the shrine was destroyed in part of a “de-curbing” effort the cemetery went through during the 1970s, but no documentation has been found to confirm this.

This picture shows the shrine in August of 2017. (Photo by the author)

For Fitzgerald’s project, the area directly around the shrine was excavated, documented, and surveyed. But the project, with the help of an advisory committee made up of representatives from the history world, archaeology world, and the Chinese community, became something much larger than just an archaeology project. It became a real opportunity to learn about the Chinese residents who lived in Salem around the turn of the century and engage the Chinese residents who live in Salem now.

As for learning about the Chinese community at the turn of the twentieth century, one of the most prominent questions was what was the shrine used for? In 1968, a newspaper article mentioned that the inscription translated to something like “to the tomb of an unknown friend.” This phrase,

This photo shows the shrine in November of 2017, after excavation.

and ones similar like “to the tomb of the good brothers,” are used in conjunction with a ceremony called Qing Ming, which centers around honoring ancestors and celebrating the return of spring. This shrine was likely used as part of this ceremony and others that took place at the ceremony.

To honor this history, in April of 2018, the City of Salem, along with many other partner organizations, organized a Qing Ming festival at the shrine. Over 100 people attended, many of whom were honored and surprised that the City and others would choose to honor Chinese history in this way. Mayor Chuck Bennett read a proclamation at the event in honor of the festival and a representative from Taishan, the area where many of the original immigrants were from, read the names of each of the Chinese people who were buried at the cemetery. Lastly, a Buddhist monk performed a ceremony to cleanse the area and honor the ancestors.  It was a touching ceremony which really highlighted how important honoring the diverse foundations of a city like Salem can be.

There are plans to provide permanent interpretation at the site, about the Chinese population in Salem and about the use of the shrine. The shrine at the cemetery is one of the last remaining pieces of physical evidence related to the the Chinese immigrants in Salem during the 1870s-1930s. Without it, there may have never been a centralizing force to interpret this history for all Salemites.

This example shows how a cemetery might take an artifact, a gravestone, or a story to help tell a broader and more diverse history of their community. This event was successful because those organizing it took the time and effort to translate all the material and listen to the people on the advisory committee about how to run and organize the event. Without the help of the committee, and a truly collaborative approach to both the archaeology project and the Qing Ming event, neither would have been so successful.